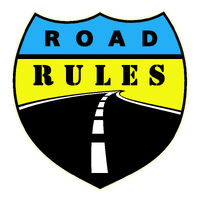 Road Rules is an MTV reality show spun off]] from the network's flagship reality show, The Real World. The series, which was only MTV's second reality show (The Real World being its first), debuted on July 19, 1995, and ended on May 9, 2007. This allowed Road Rules a total of 14 seasons and 12 years on the air.

The series followed six strangers, between the ages of 18 and 24 (five strangers in the first four seasons), stripped of their money and restricted to a life in an Recreational vehicle, traveling from location to location. The strangers were guided by a set of clues and a missions to complete at each location. It was nominated for an Emmy Award in 2001.

The ground-breaking series was a pioneer in travel/adventure/reward reality television (together with Mark Burnett's Eco-Challenge productions). Road Rules was created by Jonathan Murray and Mary-Ellis Bunim of Bunim/Murray Productions. After Bunim died of cancer in early 2004, the show went into hiatus for three years. After season 14 ended, it was confirmed that Road Rules was no longer in production (though neither MTV nor Bunim-Murray have commented on the status of the series

The idea of Road Rules came to mind when Real World castmates Jon, Tami and Dominic traveled in an RV across the United States to get to their The Real World: Los Angeles house in the first two episodes of the second season. Bunim-Murray began working on the show soon after the third San Francisco season, and finally debuted in 1995.

The show generated a spin-off series, also broadcast by MTV, known as The Challenge (originally known as Road Rules: All Stars before being renamed Real World/Road Rules Challenge after both its precursors), which is still in production. The spin-off series is mostly cast-contestant dependent on both Road Rules and The Real World as it combines contestants from various seasons of both precursors. The long-running Challenge series has well outlasted Road Rules, having run over 20 seasons (1998–present).

The series began with a simple format, closely mirroring its parent show The Real World. The concept was simple, abandon five strangers on the road, take away their money, have them drive around in an RV completing missions and doing odd jobs for money, and if they lasted to the end of the trip, they would win a "handsome reward". It was touted as The Real World on an RV, but as the show progressed, several changes were made to the show for various reasons, mostly having to do with causing excitement and raising sagging ratings.

In its third season, producers of the show took production to the next level by deciding to move the show from the United States to Europe. While the first two seasons were not themed according to the series' location, the third season introduced the subtitle into the concept which would usually strand the Roadies in different locations around the world.

For the first time, the RV was completely abandoned for a short time in favor of an alternate mode of transportation. The cast traveled in and around the Caribbean islands and for a short time traveled on a catamaran. This season also competed against the Boston season of the The Real World in San Juan, Puerto Rico, planting the seeds for The Real World/Road Rules Challenge and future face-offs.

Changing the dynamic of the cast in hopes of creating more drama by including more people in the RV, an additional cast member would be included in each season, changing the number of cast members from five to six.

Enticed by the idea of sailing around the world, producers put the cast on the (for 2005) University of Pittsburgh's Semester at Sea educational program. For the first time in any season, in order for the cast to get their handsome reward, the cast needed to complete coursework aboard the ship. Prior to this, cast members only needed to get to the end of the trip, and would not be penalized for refusing to do a mission. The most unusual mission was "Anime Mission", visiting Japan and experiencing ADR recording by their voices with Japanese director, Yuji Moriya who was center in the anime industry in the USA at that time.

Due to an exaggerated trend of sagging ratings, some say due to the Semester at Sea season, the show underwent a major re-tooling. The Maximum Velocity Tour represents when the series transitioned from a documentary-style reality show to an entertainment reality show. The show was brought back to the US and given a "game show" format. At the helm of a trip was a fictional character named the "Road Master" completed. After the cast would complete a mission, they would have money added to the group pool and if they failed to complete a mission, they would lose the money.

Producers continued to re-tool the show. This time, if the cast members lost two missions, they would have to vote out a cast member. Any additional mission lost after that, another cast member would be voted off. Also, instead of adding money to a group pool, the cast competed each mission for a "key" to the handsome reward. The "keys" were placed in the RV on a large board where each "key" represented a virtue the cast learned in that mission. For this season, the "key" would be represented as part of a crest. If the cast lost a mission, they would not receive the "key" until they voted off a cast member. Jisela Delgado was the first cast member to be voted off in the series. Katie Doyle was the first replacement in the series. The series remained largely unchanged after this season, although each subsequent series had its own variation on the rules of the game.

After the series' thirteenth season, MTV decided not to renew the series, giving the official status of "on hiatus" for four years. In March 2005, Bunim-Murray Productions pitched the idea of an interactive format to the show in which viewers at home would be a part of the series, and running the series in real time in order for the viewers at home to have a say in the competition.

Setting up the idea for The Real World/Road Rules Challenge, the face-offs have come to be an instrumental part of each season. The current cast competes either with a current "The Real World" cast who would be filming their series parallel to theirs or a former Road Rules cast, if Real World was ever out of its production season. The first official face-off, between the Islands and Boston casts gained such high ratings, that another spin-off series was begun, the ever-popular Challenges, and a pattern in every season where the cast would compete against another cast for a separate prize.

Retrieved from "https://therealworld.fandom.com/wiki/Road_Rules?oldid=4075"
Community content is available under CC-BY-SA unless otherwise noted.